Is anyone else ready for autumn?

The locusts are singing more quietly now, the nights are cooling down to where I can use a blanket at night, the beans are turning yellow, the winter squash is ripening...

My daughter brought me three kitchen towels in autumn themes yesterday. Her boyfriend thought she was nuts, but we knew better. :)

I can hardly wait until I can put out the scarecrows and the pumpkins and the fall bouquets. I don't do Halloween, but I do love to decorate for the fall season.

Now and then I might even spend a little money on fall decorating, but not much. The scarecrows I've had for quite awhile - acquired one at a time. I made one, one was a gift and so on.

I wait for the grasses to turn colors and the fall flowers to go to seed, then I make (free) bouquets to decorate with. I was into plastic canvas needlepoint for awhile (a cheap craft!) so I have some decorations left from that.

This year, I'm thinking of gathering the corn stalks left standing in the garden and making a (free) corn shock for the front yard.

Do I sound like a cheapskate? Maybe I am, but I believe that I enjoy my decorations as much if not more, than someone who runs to the store and picks up "a few things" to decorate with.

Mine are not only cheap or free, they're satisfying in a personal way. When you create something all your own, there is no comparison to anything that's mass produced. That's a level of enjoyment that can't be bought at any price.
Posted by Pat at 2:34 PM 10 comments:

Are we really in for a bad time? Or will the economy steady itself (with a little help) and get back to "normal"? The fact is that nobody knows, so it makes frugal sense to be sure we're prepared.

It's always wise to get our financial houses in order and now even more so. Pretend that you woke up
this morning and were without a job. Think about the things you wish you'd done to prepare for it, then do those things now.

Advertisers pour money into advertising to people like that; the people respond by buying what they can't afford. Sooner or later, it happens. When those people can no longer buy beyond their means,
and can't make those payments any longer because of other hidden and not so hidden factors in the economy, the businesses who have catered to them suffer.

When the accounts due aren't paid and the people aren't buying, those businesses don't have enough cash or credit to pay for more advertising or inventory and so they lay off workers to try to make up the difference. Those workers can't pay their bills or buy more goods... and the merry go round
speeds up.

It's perverted logic to say that if we only go deeper in debt, things will get better. Spending money you don't have will catch up with you, sooner or later, and it doesn't matter who you are.

Oops, there went another one... 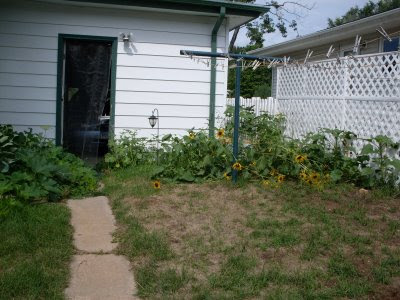 These sunflowers were obviously not deeply rooted. This ground is very poor, with a shallow layer of topsoil over clay subsoil, so it's hard for annuals to get a good toehold.

On the other side, shorter oil type sunflowers weathered the storms much better. 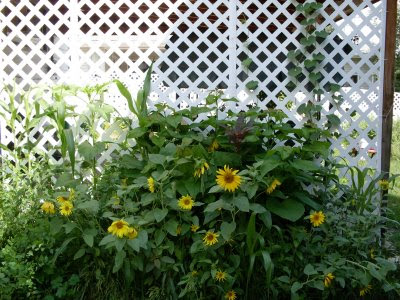 In case you hadn't figured it out, I finally got a new digital camera. It's a Samsung, , and with careful saving of other Amazon gift certificates and a good daughter (another gift certificate for my birthday), it didn't cost me anything.
Posted by Pat at 11:30 AM 4 comments:

Not necessarily frugal, but... 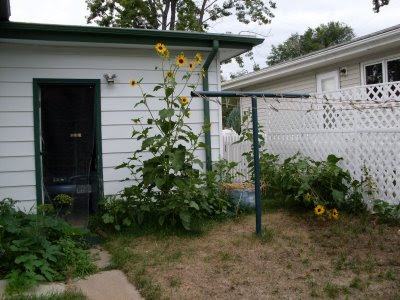 We got four inches of rain in an hour. The sunflower on the right was actually slightly taller than the one that was protected by the back wall of the garage.

My backyard is on a slope so there was a little mud flowing along with the water. We needed the rain, but all at one time??
Posted by Pat at 10:25 AM 5 comments:

I decided to make a braided rug for my living room out of old t-shirts. The problem is that I'm not really a t-shirt person. Most of my t-shirts are polo style or at least have a collar, and there are very few of even those.

I dug through the rag bag and I asked my youngest daughter to save any she might throw out (that was a long shot - she never throws anything out).

So... I slowly started sorting out some old ones that I have worn and enjoyed over the years. By "years" I mean 8 or 10 - maybe 12. They really are getting a little worn, but they're still good. I mean, they're all in one piece, no holes at all.

It's kind of strange, but old clothes sometimes seem like old friends (or enemies). I remember when I found this one at a garage sale and I remember wearing that one to that Christmas party... I remember someone's comments on that one.

I'm NOT sentimental. Memories wouldn't keep my from cutting up a shirt. What stops me is... well, I hate to destroy something perfectly good. I keep thinking that I could do this or that to them. Embroider a little flower on this one, dye this one, split the front and add some buttons to that one.

I keep weighing the desire to have a neat braided rug for the living room against my natural frugal (ok, cheap) nature and I'm still not sure how it balances!