I've been hearing this for the last few years. Is there really a shortage of canned pumpkin?

That question was brought about by a tip in the Dollar Stretcher Tips, a weekly newsletter from Dollar Stretcher. (If you don't subscribe, you're missing some cool ideas - go here: http://www.stretcher.com/subscribe/subscribeIF.cfm and scroll down to find it.)

Anyway, the woman who wrote in said that since there was a shortage of canned pumpkin, she had been making "pumpkin" muffins using sweet potatoes because they're cheaper. (Somewhere; not here).

My question is: Since whole, fresh pumpkins are available anywhere in the fall of the year and usually at a cheap price, why would anyone buy canned pumpkin? It's easy to cook and easy to freeze and one pumpkin will yield many, many more cups of pumpkin than a can for about the same price. Besides that, it tastes better and you can use your Halloween pumpkin. Why throw it away, then go and buy pumpkin??
Posted by Pat at 5:43 PM 27 comments:

Too poor? Or too rich?

My sister in law once bought me a "rag mop" head made of strings. I guess she thought I couldn't afford to buy one, since I was using real rags, which lasted much longer and didn't come apart all over the floor.

Mom once bought me a package of paper napkins, since I was using cloth ones.

There are other examples, but I'm curious: do other people think you're too poor to buy wasteful products?

Then there are those who look at my cloth napkins and go something like, "Oh, my, we just use paper napkins; this is nice." I guess she didn't know that my version is cheaper than hers - buying disposable napkins over and over and over again.

So which is it? Poor or rich? I know one thing. I'm richer by using cloth napkins and real rags in the mop than I would be if I bought those things over and over and over...
Posted by Pat at 10:02 AM 21 comments:

And what to do with them? I don't drink much of that stuff any more, but like all good hoarders, I stuck a few back... just in case.

I have used them over time. One way was to cut the top off and use it for a funnel. It fits perfectly into the tops of gallon milk jugs.

I used the bottom half to hold silverware. I wash dishes by hand so I use it to drain them. You could cut it a little shorter and use it to hold silverware or plastic ware for picnics or other informal gatherings. Be sure to trim the top evenly or you'll get scratched.

Using the bottom half again, rim the edge with colored tape and/or paint it and store knitting needles in it. Cut it a little shorter for short needles or crochet hooks, longer for long needles and long afghan hooks.

Using the same method, create a terrarium. Keep the lid on the top to keep moisture from escaping.

Make an ant farm with one. Ants can't climb up the slippery sides, especially upside down like the curving top will have them doing. Remove all labels so you can see the ants easily.

Fill one with sand or dirt for a door stop.

The bottom line is that they're containers that you can cut easily to suit your needs. When you cover the cut edge they can be used for anything that doesn't require heat. Serve salads in them, use them for planters, keep odds and ends stored in them, carry water in them, let the kids play with them without cutting them. They make grand water "guns" (more on the order of canons!).

Oh, yes... in the winter, fill one with hot water and use it to keep your feet warm. The lids close tightly so you don't have to worry about a leak and the water will stay warm an amazingly long time.

They just don't make them like they used to. Unless you want to pay an outrageous price, that is!

What started this rant? I pin my hair back, sometimes into a sort of bun, with bobby pins. I had the same ones for years, but eventually, they had to be replaced. No problem; I just grabbed some when I went to the grocery store. Done deal, right? Nope.

Well it was, kind of. I found and bought the bobby pins. I brought them home and used them for three or four days, when one of them sprung and wouldn't hold my hair any more. The next day another one went. Then every two or three days I was throwing one out, so I went back and bought a different kind and they did the same thing.

Not very frugal! I'm sure the idea was to use less or poorer grade metal and save somebody something while encouraging the public to buy more often. In reality, the company lost my business, not only for the bobby pins, but for its other products.

My sister had some bobby pins from ages ago and gave them to me. Wow, what a difference. Not only are they still unsprung (new word?), they hold my hair the way they're supposed to.

And now on to the clothes pins... but you probably know all about them. I have clothes pins that I bought at least 15 years ago and I still use them. I leave them out on the line all the time. So... I decided, that since they were so old, I should buy a few more to replace them as they broke. Bad move.

The spring type of clothespins i bought are so weak they will hardly hold themselves to the line, let alone laundry. And they're cut at such an angle that I tend to grab the wrong end. Maybe that's why they don't work very well - that and the poor grade of spring metal they use. I heard that you can still buy good quality spring clothespins. I wonder which arm and leg they'll want?

Safety pins. Safe, my foot. If a pin that bends out of shape so easily that the pointed end slips out of its notch, then "safety" is just a traditional misnomer, like car length "driveways," and city parks with no parking zones. Cheap metal and a cheap design do not equal a quality product.

Email ThisBlogThis!Share to TwitterShare to FacebookShare to Pinterest
Labels: frugal 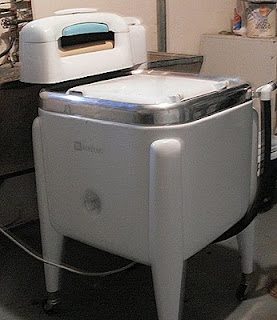 Need I say more? A real, vintage, Maytag wringer washer. And it works great! I could hardly wait to try it out so I washed a load of rags I'd been saving just for that purpose. A half hour later, they were on the clothesline in the sun.

The basement in this house has a set of old granite laundry sinks. I don't know how much they hold, but it's probably around 40 gallons each. It's a perfect setup, just the way it was planned to use a wringer washer.

Ok, so you're not interested in actually using a wringer washer. That's old fashioned, anyway. I mean, now you have an automatic washer that you throw clothes in and just wait... and wait... and wait. Eventually, it does all the work for you. And if you miss a stain, oh, well. You can just buy some stain remover. Or buy some new clothes. After all, you just bought maybe a hundred gallons of water. 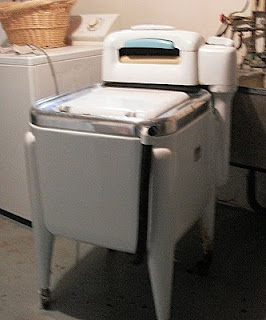 You know what I'm saying. It's cheaper, by far, and faster, too. Wringer washers do a better job of getting clothes clean. Think of it. A machine that gets clothes cleaner faster using less detergent, less electricity and is cheaper to buy, too.

I know most of you are not convinced. Wringer washers do take a little  more of your time instead of just time, but they take less time to do a load. They take a little more energy and work to do that load, too (but I know the modern way is to pay the gym to get your exercise).

Still with me? I already wrote about the benefits of using wringer washers and a little more, too:

What to Look for in a Wringer Washer

How to Properly Set Up and Use a Wringer Washer
Posted by Pat at 11:20 AM 12 comments: