What to do between now and cold weather

For some of you, "cold weather" is little more than a nice dream while you're still having searing temperatures. For others, it really never left this year! Either way, cool or colder weather is coming and we need to prepare for it. It may seem early to be thinking about it, but better a little early than a little late.

More on "Cash for Clunkers"

This was sent to me so I thought I'd just share and make no comments:

Cash for Clunkers Watch
Posted by Pat at 9:31 AM No comments:

Let me say right off the bat that I don't agree with this program. First, a car that's still worth $4500 isn't a clunker. A clunker is a car that looks bad, runs bad, and costs more to maintain than making payments on a new car.

Secondly, I would never recommend that anyone buy a brand new car. A good part of the value is lost the moment you drive it off the car lot. If you buy a car for $30,000 and it loses 10% of its value in the first 30 days, there goes a third of your "cash for clunkers..."

Most people will have to finance a new car. If you do, DON'T think that you're paying the sticker price for the car. Multiply the amount of the payment times the number of months you have to pay and that's your real price.

There's another reason. If these "clunkers" are destroyed, what do people who need to drive older used cars find to buy? Bus tickets? That may be great in Washington D.C., but it isn't very practical if you live out in the country, or your city doesn't have good public transportation, which pretty much covers the rest of the nation.
Posted by Pat at 9:35 AM 7 comments:

No AC and a ramble

We haven't needed air conditioning for a few days now... thank heavens, no heater, either! Although I did put a blanket on the bed tonight. I love this weather, and not just because it's frugal, although that's a great part of it. We'll probably have more hot days, but the nights are getting cool enough that the house can cool down at night, and the days are short enough that it doesn't heat up again much.

Besides that, we don't need much if any, extra watering, with a few rain showers and cooler temperatures. Even the garden seems at peace for the first time this summer. The tomatoes are ripening slowly, but there won't be much of a crop since they've all but quit blooming. Things are slowly coming to an end as autumn slowly creeps in.

I know it's not that way for all of you. Some of you have longer growing seasons and some of you have had a hot and dry summer. There are advantages to everything, though, even if we have to think hard to find them.

Hail tore little green cherry tomatoes from the vine and as I was picking them up, I remembered what Laura's mother said in Little House on the Prairie when the crows got all their corn. "No great loss without some small gain." So, in the spirit of eating the crows that ate their corn, I gathered the green tomatoes and made green tomato salsa. It was pretty good!

Be aware of your options at all times. That should be our frugal motto... or something like, "Do the best you can with what you have."

Stocking up: Hard times ahead?

Do you remember a year that seems so bad, garden-wise? All across the nation, gardeners are having trouble with failed or late crops. Too wet, too dry, too hot, too cold... bugs, fungi, bacterial and viral diseases... it doesn't take a genius to see that food prices are going up again.

What troubles the backyard gardener troubles agribusiness, too. National food stores are at a low right now and with low yields, increasing those stores may be impossible.

This means higher prices. Not only will there be less from the farmers, there will be more demand as those who would otherwise depend on their own produce, have to buy more store bought food.

Some people are stocking up more this year than ever, as this thread from the Dollar Stretcher forums shows. My advice? Follow their lead. Stock up, put up. Can, dehydrate, freeze, find a cool place to store winter squash, cabbages and potatoes when or if you can find them for a good price.

I'm not trying to scare you... well, maybe I am. I'm not trying to paint a doomsday picture, but all of us need to see the implications of a bad year almost everywhere in the nation. It's just practical good sense to do what you can to hedge against higher prices.
Posted by Pat at 12:35 AM 3 comments:

Paying for a car

I'd rather encourage others to try to save enough to pay cash than to give them excuses to go into debt, no matter what it's for.

It's easy enough to get carried away with all that shiny paint and leather and "new car" smell... (dealerships put that perfumey stuff in old cars, too). Don't let it take over your good senses.

The first car I owned, I paid $50 for. I drove it all summer, then sold it for what I paid for it. The next car, I went into debt for... and the next one and the next one. I didn't think I could ever get ahead enough to buy one outright... why, saving several thousand dollars just seemed impossible.

Then, somehow it happened. I had enough in savings to pay cash for a used car, and I've never looked back. Making payments ahead of time beats making them after by a long ways! First, I got to keep the interest instead of paying the bank for the privilege of borrowing money from them. Then, I could watch the balance in my savings account go up, instead of watching the balance on a loan go down, and I'm pretty sure the savings went up faster than a loan would have gone down. The reason is that I was a lot more motivated to pay extra to a savings account than I would have been to a loan account.

When it was time to get rid of that car, I had more than I needed in savings to buy the next one.

It's like starting off on the wrong foot when you borrow that first time. It's a lot harder to get in step than if you'd started on the right foot to begin with.

If you have teenagers or if you are one (or a young adult) looking to buy your first car, take this advice to heart. Pay for it first, upfront. Even if you have to buy a clunker and keep saving for the next one, you'll be 'way ahead next time.
Posted by Pat at 3:31 PM 2 comments:

Giants in the garden 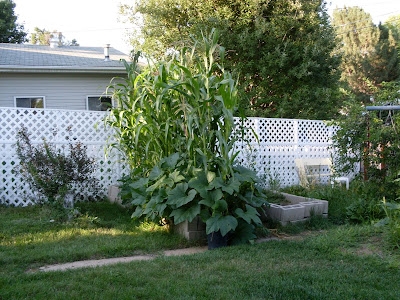 That's a six foot fence in the background. The corn has tasseled out and a few ears are forming. The plant in front is a yellow crook neck squash. It looks like it's out in front, but really, it's planted four rows into the corn.

What looks like the end of the raised bed is the back bed, empty now. I am sheet composting it in preparation for next year. I thought about planting fall crops in it, but decided the soil needed a rest.

Beets from it are canned; onions are hanging and curing. Green beans are in the freezer, greens (beets, lambsquarter and dandelion) have been canned. So you can see what I've been up to!
Posted by Pat at 9:34 PM 8 comments: