I do what I can to use organic products, but I don't feel as if I can afford all of it. I haven't come across any organic skin care products that I could afford regularly and none locally, but I haven't given up looking. One thing I have looked into is using naturally occurring products.

I use yogurt for a facial now and then and plain organic yogurt is good for minor fungal infections as it has the "good bacteria" that fights yeast and other fungi. It's as good for us on the outside as it is on the inside!

Honey is antibacterial, soothing, and promotes healing of scratches, cuts and even larger wounds. It keeps wounds moist, but safe from bacteria so they heal faster. Honey used to be used a lot more before antibiotics were discovered. Since it's a completely natural substance with no chemicals added, it has to be safer than antibacterial ointments.

Olive oil makes a good moisturizer if you put it on while your skin is still wet from the shower. It's also good to comb through dry hair. Soak your nails in it, then wipe and buff and they'll look and feel great.

Then there's vinegar. That can be used in so many ways I hate to even start here. Hair rinse, face peel, sunburn soother, diet aid and denture soak for starters.

Those are very frugal substitutes compared to over the counter medications, even if we buy the organic version of them.
Posted by Pat at 10:41 PM 3 comments:

Gardening into the winter

It seems to me that it's getting cold early this year. I've been hobbling about with an infected toe and haven't been able to finish digging dandelion roots and I haven't even touched the Jerusalem artichokes or the horseradish root. Who can dig when you can't even wear a shoe?

I was glad, in a strange way, to see the first frost of the year; maybe because it was such a strange summer that the garden seemed like a battle. Even with that feeling, it was with a tinge of regret that the garden tools, the hoses, the snips and the rakes and hoes, have all been put back in their places to stay for months and months.

I'm definitely missing the taste and convenience of fresh produce already. There is no grocery store in the nation that sells a cucumber that tastes as good as one fresh off the vine, or a handful of baby yellow crookneck so fresh that they taste like squash blossoms themselves.

I'm not going down without a fight, though. This year I will grow leaf lettuce and radishes and maybe some spinach or wild spinach (lambsquarter) on my windowsill. If I can come up with a deep but narrow container, maybe I'll grow some dandelion greens, too.

And some green onions! I have onion seeds saved from a couple of onions this summer.

Whatever you do, don't throw them away once they're used. If they're the kind with strings, pull the strings off and use them to tie things together, hang decorations in a window (with a thumbtack) or put a couple dozen together, tie in the middle, trim and you have a cotton pompom. Tea bag strings can be dyed easily with generic kool aide, tea or coffee. Don't make up a packet of kool aide for that purpose, but when you're making it anyway, take out a tablespoon or two before you add sugar and dye the cotton string with that.

Oh, and if you soak the tea bag strings in borax and salt dissolved in water then let them dry for a few days, they make good candle wicks for short candles.

I'm not through yet. Use the tea and the bags themselves to compost, or dry them completely and throw them in the fireplace or wood stove. Put them on your houseplants before you water them.

Just because tea bags are used, doesn't mean they're not still useful. Now, go apply that to everything you can think of.
Posted by Pat at 9:01 AM 8 comments:

I bought a new furnace last fall to replace the one that was installed when this house was built in the mid 50's. Yeah, it was that old and yeah, it still worked. I replaced it "just in case," and to save on natural gas. (With higher price of gas last year, I couldn't tell the difference!). The new furnace is nice. It's smaller and uses electronic ignition rather than a pilot light. The fan is stronger so the house is more evenly heated. But... it only has a 10 year warranty.

I'm still not sure if it was the wisest thing to replace the furnace that ran without trouble for 60 years with one that's guaranteed to do so for only 10 years.

Is that what they call quality controlled? Controlled to last a much shorter period of time than it could and should last?

Your refrigerator, your kitchen range, your slow cooker, your TV, your iron... they're all designed to fail within a certain period of time.

It used to be a matter of pride to manufacture a furnace or a washing machine that didn't need repairs. Pride? What's that? Now it comes when the company turns a profit, meaning they sold a lot of products. The more the better, so they manufacture them to become obsolete or to break down irreparably within a few years so people will have to buy new ones.

Did you ever wonder how a word came to be? I do, all the time, so I looked up these two words. According to Dictionary.com, cheapskate comes from " 'miserly person,' 1896, from cheap (q.v.), second element perhaps from Amer.Eng. slang skate 'worn-out horse' (1894), of uncertain origin."

Worn out horse? Well... ok. What about tightwad?

Again, quoting Dictionary.com"'parsimonious person,; 1900, from tight in the sense of 'close-fisted' (1805) + wad. The notions of stringency and avarice also combine in Mod.Gk. sphiktos 'greedy,' lit. 'tight.'"

I like the word "frugal" better, but all these are all used to mean the same thing, at least in certain circles. Let me put it this way: Sometimes I can be a definite tightwad in the sense of close-fisted. The rest doesn't apply. I'm not sure about the cheapskate.

Are you miserly? Do you grasp and hoard and try, even with a little avarice, to "get things"? I didn't think so.

Frugal, I am and I'm not ashamed to admit that. The rest... well, I'll leave that to others.

(Also from Dictionary.com. I'll let you look it up yourself.)
Posted by Pat at 2:34 PM 2 comments:

Batten down the hatches!

Winter is upon us already here, it seems. It will probably warm up again (somewhat) but the damage is done. Ugh! Not a pretty sight. 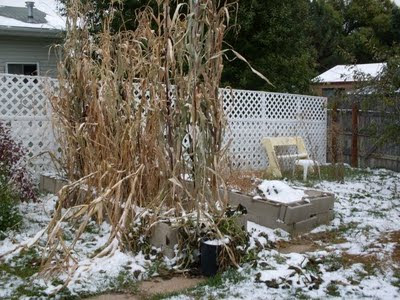 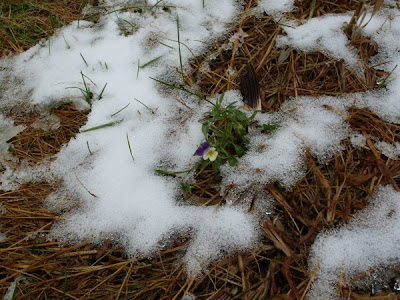 On a brighter note, the horseradish is through growing for the year, so I can dig that. No great loss without some small gain. Laura's mother said that in "Little House on the Prairie" books. She was one wise woman. I am counting my gains today.
Posted by Pat at 11:13 AM 6 comments:

If you garden and you're frugal, surely you've saved at least a few varieties of seeds from year to year. If you haven't, you're wasting money. The seed companies get theirs the exact same way you can get yours, so why pay them to do it?

I keep reading that hybrids won't breed true if you save the seeds from your own crops and that's true of some things, but not all. I have saved seed from hybrid lettuce, radishes and acorn squash, among other things, and they grew true to themselves the next year. It's worth a try, especially if you come across something you really like, or something that grows very well in your garden.

Heirlooms are best for seed saving, though. Think of it this way. Every time you toss out the seeds from an heirloom tomato or a summer squash, you're throwing away a perfectly good package of seeds or in most cases, several packages of seeds.

Nature is extremely generous when it comes to making seed and she will give them to you for free. Why buy them next year?
Posted by Pat at 10:53 AM 5 comments:

Christmas beans are large lima type beans that have reddish splotches and marks on them. I had some left over from a package I'd bought at the farmer's market three years ago. Last year, I planted a few of them and they didn't do very well, but I got a little crop from them. This year, I picked out 10 beans from last year's crop and planted them.

Out of the ten Christmas beans I planted, only three came up. Of those, one died right away, leaving two healthy, stout bean vines. They grew all summer, filling a 5 X 5 trellis behind them.

Now, I don't usually count beans or anything else like that, but I was curious as to what kind of return they gave, so as the harvest came in, I counted the beans. (I know, I know...) There are still a few out there, but the frost is threatening closer and closer each night, so I'm not counting on them (no pun intended!). If they hold out a few more days, I'll pick them green and let them dry inside.

It seems like there should be a lesson in that.

If we try and try and try again, the reward will come. If you have cut costs, then found yourself spending more again... try again. And again if you have to. If one thing doesn't work (or grow, like my beans), another will. Sooner or later, you'll realize an amazing result.

Plant your Christmas beans, dream your dreams, set your goals and you'll see the results come in, in due time.
Posted by Pat at 9:54 AM 8 comments:

When you buy facial tissue, look for a pretty box that matches your office or kitchen colors. When the box is empty, cut off the top and use the bottom to store things. I have a facial tissue box with red apples and roses on a green background which holds my stash of pens, pencils and markers on the back of the office desk.

Use the cut off top and cut bookmarks from it. Bookmarks are usually 5 to 6 inches long so you can get two from one box top.
Posted by Pat at 9:02 AM 16 comments:

With a low of 33, it was close. I picked the last two zucchinis, a dozen and a half little yellow squash and the last cucumber. I decided to leave the cherry tomatoes to their fate... and this morning they're still blooming.

In a way, I'm glad the summer is over because I love the fall season. But my frugal nature just hates to let go of the source of such wonderful, free (or at least dirt cheap!) food.

Yes, I've canned and dehydrated and frozen... but it isn't quite the same as going out to pick a salad for dinner or a few squash to sautee for breakfast. Maybe I'll go look at my shelves of canned food again and remember that this winter I'll be eating some really good food for a really good price.
Posted by Pat at 10:06 AM 8 comments: