How to freeze purslane for later 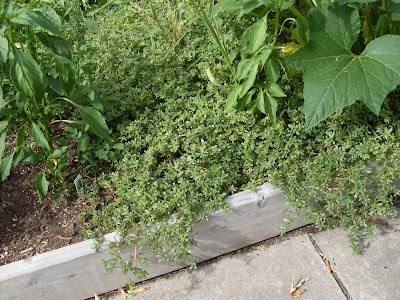 The garden isn't doing so well this year, but I have a bumper crop of purslane! I mean, a bumper crop! I've been eating a lot of it but after awhile, even purslane gets tiresome. I have tried to freeze it by blanching first without much luck; tried dehydrating it and it lost its flavor. I tried pickling it and that's okay, but how much pickled purslane can one eat in a year?

Finally, though! I finally came up with an idea that works. I had made a big pan of it sauteed in butter when I had company last weekend. There was a little left and I started to put it in the refrigerator for later when I happened to think that maybe I could freeze it.

Today I took it out, let it thaw and warmed it up and it was just like I'd freshly cooked it. Here's exactly how I did it:

Wash, look and chop purslane into one to two inch pieces while heating a skillet to medium heat. Melt enough butter to cook the purslane. Cook quickly, stirring often, just until it cooks down. It should still be somewhat firm. Let it cool, then package for the freezer. How easy is that?