Debt as a Matter of Life 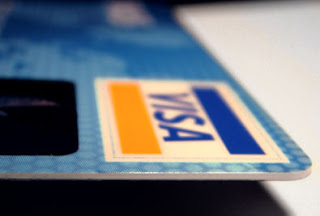 Disclaimer: There are times when going into debt is simply unavoidable. Unexpected bills, a loss of income or major life changes can throw anyone's finances off. Those are not the people I'm talking about here. I'm talking about those who go into credit card debt continually and unnecessarily.

Some time ago, I was sent a link to an article in the Terre Haute Tribune-Star called "Americans Using Credit Cards to Pay for Basics." Unfortunately, the page is no longer online, but it was disheartening to read. It's not because I think times are so tough that people are having to go into debt just to survive, but I hated it because it showcased people who really don't know how to survive without credit cards. It even evokes sympathy for them.

I don't know these people who are having to buy food and pay bills with credit cards (Excuse me, doesn't using credit cards create bills that have to be paid?), but I would bet almost anything that they would benefit from a little education in frugal living.

The article states that "groceries, emergency car repairs, medical bills and kids' tuition" are being paid by credit card. Okay. I'll go with emergency repairs and medical bills when necessary. The rest is baloney.

If times are that hard, they could find a food bank. They could adjust their diets. They could avoid eating out, buying convenience food, paying for name brands. They could learn different ways of obtaining food. Do they make too much to get food stamps?

Kids' tuition? When it makes sense to pay for your kids' tuition when you don't have the money to pay for daily expenses, it also makes sense to burn dollar bills in the fireplace for warmth because you don't have the money to pay the heating bill. Kids can work for a year before starting college and they can work during college. Lots of kids do. There are grants and student loans that the kids are responsible for, not the parents.

I'll even go so far as to say that a college education is not as necessary as, say, eating or breathing and it's not the parent's responsibility to go into debt for it. If a parent can pay for tuition and wants to, that's fine. But if a parent feels obligated to the point of putting themselves into debt, that's not fine.

Using credit cards as a "safety net" is not smart, although I know there are (a very few) times when it's necessary. The problem is two headed. It comes when people can't discern between what is really necessary and what is not and it comes when people don't realize how crucial it is to have an emergency fund.

I'm not really blaming the people. They've grown up in an economy that encourages debt. They don't know any better and that makes me really fear for this country. When our economy slides into a real depression, many won't have the fortitude, knowledge and common sense to survive it.

If you know someone who lives like this, do what you can to convince them to get out of the credit card trap. Who knows, you could save someone's life.